When clients visit the Craftbuilt Kitchens showroom, they won’t miss the fluffy Director of First Impressions, our very own Crakit the Cat. Whenever the clients’ children ask about her, this is the story we tell:

She was a young black stray with green eyes and white fluff on her chest. With head and tail low, her curiosity lead her to the showroom. She would watch through the window, her eyes fixed on the movements inside Craftbuilt. She would do this every morning like clock-work. When she felt anxious, she would rush to the bushes, keeping her distance.

She doesn’t go unnoticed. Her smooth black coat often glistening under the sun. It catches the lady humans’ attention. When a human tries to approach her for happy pets, this black cat then runs off into the bushes once again.

This happened almost every day until she realized that these ladies must be very cat-friendly. She may be tired of running off to the bushes every day, too. Still, she was careful. Now, these humans have decided to feed her from a distance. From afar, they encouraged her to come close. The black beauty cat still kept her timid charms. Over time, she tip-toes forward just enough so Sharon, the office manager, was able to feed her from a close distance. Still uncertain, she sniffs the offering. “The offer must be sufficient,” says Sharon.  The black cat slowly eats it up with her sharp eyes still watching the humans. 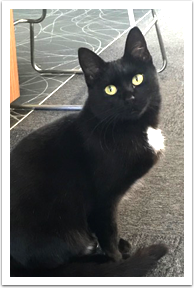 This lady cat was still quite unsure about the humans when they would try to get close to her. But she let them come near her after several feeding attempts. She was underweight for her size. Thinking that she might have a human of her own, these Craftbuilt Kitchen ladies placed an ad to see if someone would claim her.

A long while has passed.  “Nobody claimed her,” explained Caroline. Now, the lady-cat has already grown accustomed to the humans in her territory. So much so that she didn’t know that she was going to be part of the Craftbuilt family soon.

It was time to get her fixed. She wasn’t very amiable at first. She may have realised what was about to happen. After coordinating with the local vets, the RSPCA and the local council, this little lady was caught along with two of her kittens and her kitten-daddy. All of which were re-homed.

After being treated at the vet, she spent a week as a guest in Caroline’s home. She found this human’s home warm and soft but after a while, she yearned for the familiarity of the Craftbuilt Kitchens showroom. Seeing that the humans dearly love and care for her, she has learned to trust them completely. After all, she needs to look after her territory.